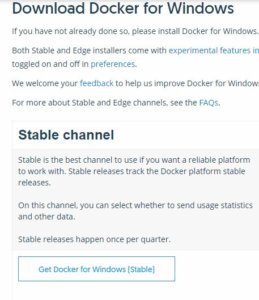 To begin tinkering with SSIS in containers, you first need to install Docker. There are some prerequisites. I will not exhaust the prerequisites here. I strongly suggest you familiarize yourself with the requirements for Docker prior to attempting to install the software.

Since I use a PC (a Lenovo P51S) running Windows 10 Pro, I chose to use Docker for Windows.

I Needed a HyperVisor

I chose to run Docker for Windows with Hyper-V: 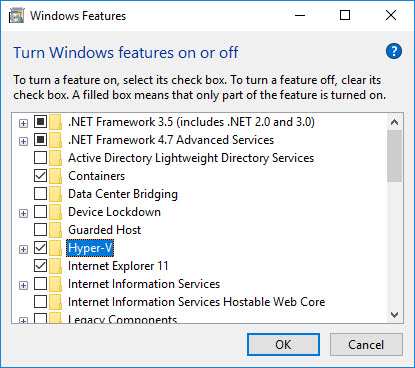 One reason I upgraded to Windows 10 was to work with containers. I read posts and articles that stated I could use Docker for Windows with VirtualBox, and I had been using VirtualBox for a long time. When I started using VirtualBox, it was the only HyperVisor that was:

I decided to switch to Hyper-V, though, and rebuilt my demo and development virtual machines in Hyper-V.

IWOMM; YMMV (It works on my machine; your mileage may vary…)  😉

Once Docker is installed you need to decide whether to work with Linux or Windows containers, but you can switch anytime: 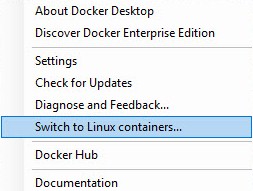 One nice thing about switching is it’s fairly painless, as one may glean from the message that displays when I click “Switch to Linux containers…”:

Docker for Windows with Windows Containers

The cool kids are using Linux containers, especially the cool SQL Server kids. I’ve tinkered a little with SQL Server on Linux. I’m interested in SSIS, though, so I’ve been focusing on running Windows containers in Docker for Windows.

Containers are like lightweight virtual machines. They typically consume less disk space. Containers spin up relatively quickly. A developer can configure a container, persist it in some state, and then turn it off. It’s faster and lighter than working with a VM. There are other benefits that we will get to later in this series.

After installing Docker, your next step is pulling an image.

I can hear you thinking, “Umm, Andy… what’s an image?” I’m glad you asked. From the Docker Glossary:

An Image is an ordered collection of root filesystem changes and the corresponding execution parameters for use within a container runtime. An image typically contains a union of layered filesystems stacked on top of each other. An image does not have state and it never changes.

I can now hear you thinking, “Umm… what?” I think of an image as a pre-configured container. What’s configured in the pre-configuration? Well, the operating system and other software I may want to use.

For example, the hello-world image is relatively small and will test your installation of docker. In the animated gif below, I show how I:

As stated earlier, the hello-world image is a test.

To search for, pull, and start a Windows container with SQL Server installed and configured, execute the following Docker commands:

If all goes well, you will see the container id – a hexadecimal number such as:

#3 above has a lot of switches on that command line. Here’s what they mean:

By the way, you can get help on any command in docker by typing docker <command> — help. To complete the list above, I typed:

Interacting with Your Newly-Started Container

There are a few ways to interact with this container. Let’s look at one, PowerShell.

Connect to PowerShell in mySqlServerContainer using the following command:

Once connected, you can use PowerShell to execute all sorts of commands, such as: 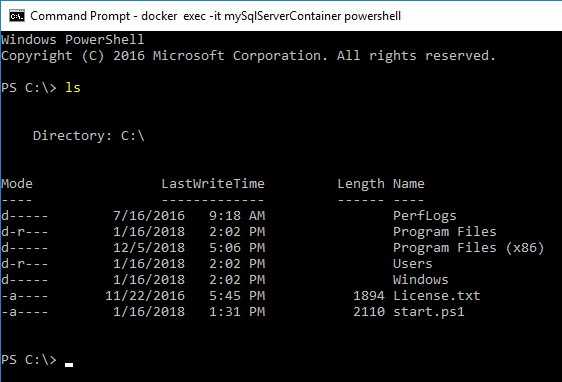 Cool? I think so too.

I’m going to stop here because this post is long enough and this is enough to get you started using SQL Server in a Windows container. That was my goal today.

In my next post – SSIS, Docker, and Windows Containers, Part 1 – Why? – I explain why this is important (to me, at least).

14 thoughts on “SSIS, Docker, and Windows Containers, Part 0 – Getting Started”