A friend and I shared a recent instant-message conversation and she told me one of the two netbooks she ordered had been stolen in transit. They are gifts for her children and one gift is gone, within two weeks of Christmas.

Tracking numbers show the netbook was stolen while in possession of the shipping company. Most likely, an inside job. It got me to thinking about the mindset of an individual who would risk their job, reputation, career, and potentially their freedom for the promise of some extra cash. I thought about what I stand for, and realized this is largely defined by what I stand against.

Because of some earlier posts and comments about project managers and MBAs, some folks have the impression that I’m anti-PM or anti-MBA. Nothing could be further from the truth.

Unfortunately, sometimes the sets overlap – as shown in this diagram: 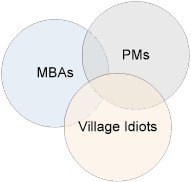 I have an uncanny knack for attracting those in the pinkish region to my projects. I don’t know why. Maybe it’s my accent. Maybe it’s my hair (if so, this is an increasingly self-correcting problem). But they are drawn, I tell you. Drawn, as a moth to a flame; as a juicy old june bug to my bug-zapper on a warm summer’s eve while I sit on the deck, watch the kids catch lightning bugs, and ponder the deeper meaning of life while sipping a beverage.

I’m not sayng all the MBAs and PMs with whom I work fall into this category. I’ve worked with some stellar project managers and MBAs. I’m just saying that if there’s a “pinkish” PM or MBA with a shot at my project, I usually luck out.

I’m also anti-unfairness. I’ve said it a hundred times during negotiations: If you’re going to bring a stick, have the decency to show up with a carrot. Translation: If you’re going to ask for something from someone, offer something else in return. Why? Because although you can stir up a swarm with any old pile of crap, you still catch more flies with honey. Trust and respect go a long way in this business, and I’m not the only one who thinks that – check out J. Ello’s excellent opinion piece: The unspoken truth about managing geeks for a second opinion.

It doesn’t just happen between employees and employers. It also happens to independent contractors and larger corporations. The last time I checked, a contract was an agreement between two (count ’em, 2) parties. Just because you’re a big company does not give you the right to push around the little guy. In fact, that’s a recipe for negative goodwill or “badwill”  – the evil twin of goodwill.

A lot of unfairness falls into the stupidity category and is captured by that first filter. Prominent, otherwise respectable people and organizations do dumb things sometimes. I doubt seriously it’s intentional, and it doesn’t start out as all-grown-up-evil-unfairness-and-stupidity… it grows into that from a tiny seed of unfairness, greed, or innocent competition.

Why does the justice system keep criminal records? Because everyone has an internal list of acceptable actions. A criminal is someone who, ostensibly, has demonstrated they’re capable of breaking the law to obtain what they want. The law isn’t a barrier to their behavior; it doesn’t play into the equation of their acceptable actions. They’ve done it once, they are capable of doing it again. So information about their modus operandus and personal information about the individual (fingerprints, DNA) is kept on file by the authorities. If a similar crime is committed, cops start with people they know have committed this act in the past.

The same goes for personal and corporate reputations. If an individual or company treats another individual or company unfairly, they are demonstrating that, in their mind, treating people unfarily is on their internal list of acceptable actions. This is the true cost of badwill (negative goodwill): there is no trust, and the respect is conditional. See J. Ello’s article: Trust and respect are at the core of the business of technology.

When it comes to dealing with folks who’ve mistreated others, this thought pervades: “If they did it to them, they could do it to me.”

How long does badwill live? That thought outlives and outlasts all the benefits gained by the person or company that behaved poorly. Even if it’s an isolated act (and they usually are not isolated acts, but indicators of a pattern of behavior), that one act remains in the memory of all who witnessed it or learn of it. Well beyond the scope, benefits, and immediate consequences; it becomes the reputational equivalent of a criminal record.

How To Fix Badwill

Simple. Treat others as you would have them treat you.

“Great. But what if I’ve already done the deed, Andy?” If you’ve abused a relationship there’s a model for that as well (taken from the same book as the first paragraph in this section). If someone compels you to give them your coat, give them your cloak also. If someone asks you to walk a mile with them, walk two. In other words, you make it right by more-than-making-up for the original mistreatment.

“That sounds expensive.” It is. It costs more than simply treating others as you like to be treated in the first place, but it costs less than years or decades of badwill.

Everyone makes mistakes. People err. Contractual parties disagree. It happens. And it will continue to happen. But a funny thing happens when you do business as I’ve described above: trust grows, respect increases. Before you know it, you suddenly have more business than you imagined. People and companies come to you, and they come to you first.

I know some companies and individuals who conduct business in this manner. As mentioned previously, they are not flawless nor faultless. They do, however, enjoy the most respect and highest credibility in their industries.

This is goodwill in action – and in the bank account.

5 thoughts on “Goodwill, Negative and Positive”