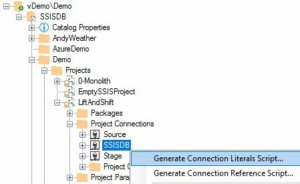 The script begins with a declaration of Transact-SQL parameters that will be used to provide literal overrides. These parameters are placed at the top of the script for easy access by release management personnel, DBAs, DevOps, or other specialists responsible for deployment and deployment testing.

The next section provides feedback for the professional deploying the script. The feedback includes the same information contained in the head documentation, followed by deployment feedback.

When executed, this documentation section returns messages similar to that shown here:

These messages are intended to be copied and stored in the Notes field of a ticketing system in a DevOps enterprise. Note the detail contained herein:

The next section of the artifact script is the declaration of parameters used to support the remained of the script’s operations. An example is shown here:

An example of messages generated by this portion of the script are shown below:

If required preceding artifacts do not exist in the target SSIS Catalog, an error message is generated – similar to that seen here:

Unlike other scripts generated by SSIS Catalog Compare, Connections Literals scripts reset all related properties (parameters) for a connection manager that are not overridden via Reference Mapping. The portion of the script that manages clearing connection property parameter values is shown here. The results of the execution of this portion of the artifact script are shown below:

The final section of the Connection Property Literal script contains the literal override. This section of the script is laden with existence checks and conditionals.

The results of executing this section of the script are shown below:

As you may glean from this analysis of one script generated for Project Connection Literals management, the Transact-SQL for scripting SSIS Catalog artifacts in SSIS Catalog Compare is rigorous, containing several existence and error-condition checks prior to performing any updates. The script is designed to be idempotent, as well, meaning the script will succeed and the results will be repeatable and predictable each time the script is executed – and that the script itself is re-executable.

Join Andy for a day of ADF training titled Master the Fundamentals of Azure Data Factory!

Can't wait to get started with Azure Data Factory and SSIS training? Sign up for the Live Season Pass and score a full year of SSIS and ADF training and save!

Are you new to SSIS? Join me for four days of From Zero to SSIS.