This post is the fourth part of a ramble-rant about the software business. The first post is entitled Goodwill, Negative and Positive; the second, Visions, Quests, Missions; the third, Right, Wrong, and Style.

There are a lot of interesting books out there on leadership. I still use this one: 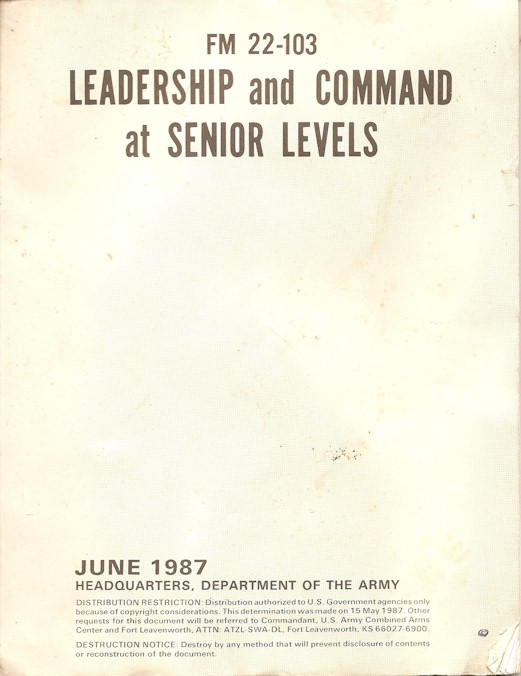 This my tattered copy, the one I received as an attendee of the Virginia Army National Guard Non-Commissioned Officer Academy. Most leadership books aren’t a matter of life and death, or the future of a nation. This one is about those things.

Each chapter starts with a quote from a military leader. You may be surprised to find concepts that apply to leading a software project in these pages (or you may not be surprised, I suppose it depends on your background). For example, Chapter 1’s quote is:

Wars may be fought by weapons, but they are won by men. It is the spirit of the men who follow and the man who leads that gains victory. – General George S. Patton, Jr.

To me, that quote says some of the same things I was trying to say about teams and leaders in Visions, Quests, Missions. This book is chock full of leadership goodies that can be applied by anyone who finds themselves in a leadership role:

I used to work for a living; nowadays I think and type. There’s a difference. Work hurt my back, and sometimes my arms and legs too. Before joining the software community, I held a bunch of different jobs. I’ve been a truck driver, peach picker, tobacco puller, soldier (part-time), factory laborer and electrician, electronics technician, electrical engineer, and farm hand – to name a few. Most of those jobs involved work.

A lot of my bosses were go-do-that bosses. They would point to something – a row of tobacco, a stand of peach trees, a pile of manure, the perfect location for a foxhole – and say something like “Leonard! Take care of that.” It was my job to go do the work. It was their job to tell me which work needed to be done.

You hear a lot of talk about motivating people in the go-do-that style of management. You don’t hear a lot about inspiring them.

Other bosses jumped into the trenches (or code, or foxholes) with those they led. These were follow-me leaders. They got out front. They physically led. If I worked on a weekend, these bosses would usually show up too – not every weekend and not for the whole day – but they made an appearance and gave up some of their time alongside the team.

I think this style of leadership works better. Why? Nothing builds loyalty like a leader out front. And when the team (or squad or family) is out of magic – when the deadline looms or more enemy troops than expected show up – you need something beyond talent or training. Loyalty will help.

I find follow-me leadership to skip right past motivating people and into inspiring them.

The follow-me leadeship style instills loyalty better than anything I know. It’s inspiration instead of motivation, and inspiration will always take you farther.