I’ve been playing and working in technology since 1975. One thing I’ve learned is: people believe the things they believe for a reason. Or reasons. I can hear some of you thinking, “What does that even mean, Andy”? I’m glad you asked.

Have you ever read something written by a fellow citizen of a technology community and thought (or even commented), “That’s just WRONG!” On technological and engineering matters, I grant that may be an accurate and objective response. But on other matters? Matters of preference? People believe what they believe for a reason. And to them, the reason is valid.

I am a student of behavioral economics. From my studies to date one fact stands out: All behavior is driven by economics.

You may read that statement and cringe. You may ask how I – as a follower of Someone who famously said “It is easier for a camel to go through the eye of a needle than for a rich person to enter the kingdom of God.” – can write, much less believe, such a thing.  I didn’t write “money,” I wrote “economic.” There’s a difference (though I believe Jesus’ words apply equally to both money and economics). Please allow me to explain.

Many people read non-rational – or anything other-than-rational – as negative. I humbly submit this is an emotional response.

Economics includes more than just money. In technical communities we use economic terms to describe software architecture; terms such as “technical debt.” Technical debt costs money, it’s true; but technical debt is not a monetary description. It is an economic description the results of earlier, less-than-optimal decisions coming home to roost.

I write “all behavior is driven by economics” not as a criticism. I wrote it because people routinely and regularly make decisions based on the output of their amygdala – the “fight or flight,” survival-instinct part of the brain that communicates in fast, powerful, non-rational (not the same as irrational) emotion.

Many people read non-rational – or anything except-rational – as negative. I humbly submit that this is an emotional response.

Similar to my thinking about failure, I believe we could all benefit from reassigning our emotions about, well, emotions.

Sometimes there’s no substitute for expertise.

Another description of Grant’s conversation might be, “Grant learned a lot of new stuff talking to this person.” These days, it’s difficult impossible to know everything about everything – even in a technical field. We specialize. That’s a good thing because the option is to generalize, and experts are rarely generalists. Sometimes there’s no substitute for expertise.

It may help to examine a different context: paranoia.

How does paranoia feel to the paranoid person?

How do we respond to paranoid people? We mostly criticize them, right? It’s culturally acceptable to poke fun at paranoid people, or to label behavior as paranoid – or even label a person as paranoid – especially if a person is behaving in a manner that suggests they believe people are out to get them. Consider this: How does paranoia feel to the paranoid person?

Do we imagine this person woke up this morning and decided, “I’m going to be paranoid today.”? Dig deeper with me: What is paranoia? It’s fear. Do we decide what we fear? I don’t think so. Behavioral economics supports me on this – our amygdala are hard-wired with fight-or-flight in response to… fear. Can we learn to control our response to fear? Some, yes. By some, I mean some people can manage some responses to some fears. If Behavioral Economics is accurate, though, we all behave non-rationally – we are even irrational at times – when we make decisions.

To the paranoid, it’s Just Fear.

How does a paranoid person feel, then? They genuinely fear the things about which they are paranoid. To a paranoid person there’s no difference between real fear and the non-real fear they merely perceive or interpret as something to fear. To the paranoid, it’s Just Fear.

Is it socially and culturally acceptable to criticize someone for fear? “It depends.” That’s a topic for another blog post on another blog. To quote the philosopher Forrest Gump, “That’s all I have to say about that.”

The Science of Fear 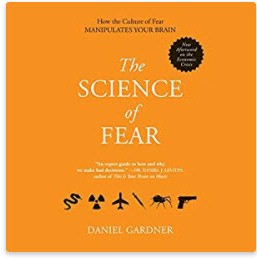 In his 2009 book, The Science of Fear, author Daniel Gardner presents science – physiology and data science – to postulate humans are lousy at rational thinking. It’s not just me, others feel the same about… feelings. The Science of Fear is an interesting book. It’s not the easiest book to read but it is, in my opinion, worth reading.

I have two points, actually: