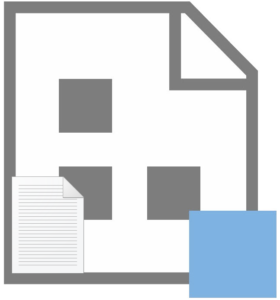 The very first data integration / data engineering framework I ever wrote was for Data Transformation Services, or DTS. The DTS framework had one job: manage connections. I don’t recall all the details, but I remember DTS included a task that allowed packages to retrieve settings from INI files. INI files are key-value files, so I simply added entries with identical keys and different values – values that matched connection strings for each lifecycle tier – and placed each version of the INI file in the same location on every server in the lifecycle.

The next framework I wrote was for SSIS. I stored metadata in tables – including connections metadata – and created a concept I called an SSIS Application. An SSIS application is, according to my definition, a “collection of SSIS packages that execute in a pre-determined order.”

The SSIS Framework File Community Edition is very similar to this first framework, except for the connections management.

To obtain the free and open-source project code for SSIS Framework File Community Edition, browse to the github repo (github.com/aleonard763/SSIS-Framework-File-Community-Edition), click the Code dropdown, and then click “Download ZIP”:

After decompressing the zip file: 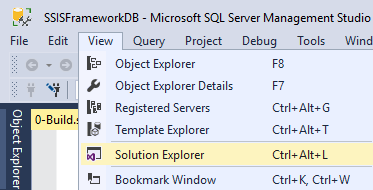 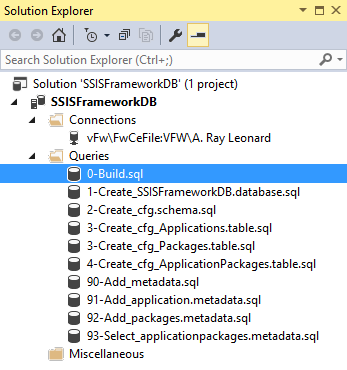 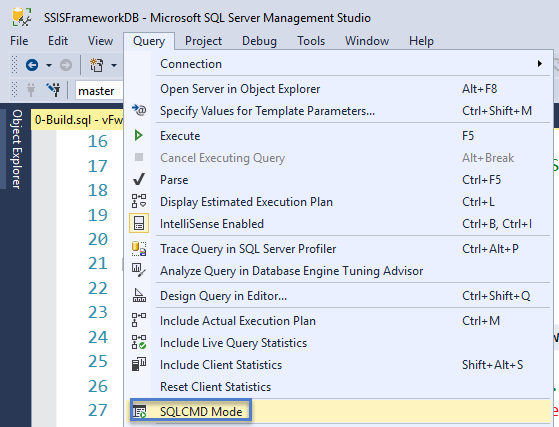 When SQLCMD Mode is enabled, the background color for some lines of code in the 0-Build.sql script changes to gray to indicate these lines contain SQLCMD instructions: 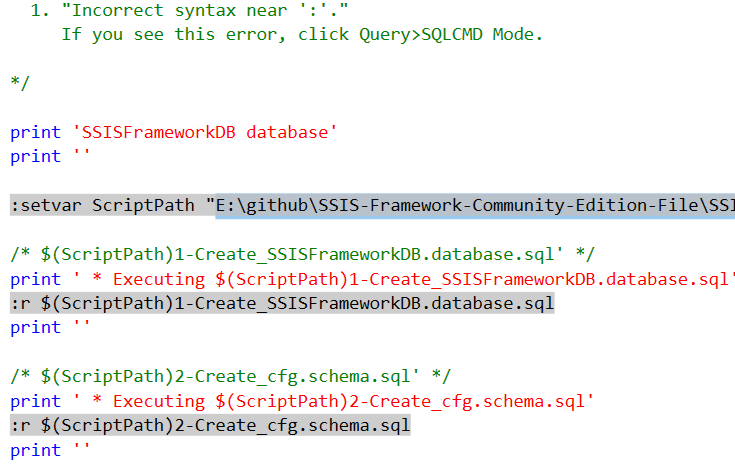 SQLCMD includes variables, and this script uses a variable named “ScriptPath” to manage the path to the additional T-SQL scripts in the SSMS database project (“E:\github\SSIS-Framework-Community-Edition-File\SSISFrameworkDB\SSISFrameworkDB\” in this example).

The trailing backslash for the ScriptPath variable value is vital.

When 0-Build.sql is executed, the value of the ScriptPath SQLCMD variable is used as the first part of the “run” (“:r”) SQLCMD command (“:r $(ScriptPath)1-Create_SSISFrameworkDB.database.sql” for example).

Execute the 0-Build.sql script and confirm the Messages tab appears similar to:

If you forget to turn on SQLCMD Mode, the 0-Build.sql script fails and returns messages similar to: 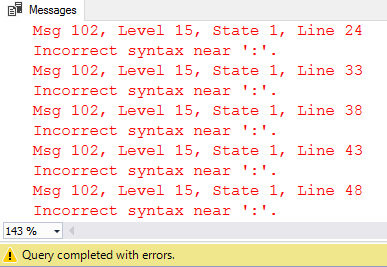 0-Build.sql is designed to be re-executable (idempotent), so if you re-execute the script, the script should succeed, and the messages should appear as shown here:

The SSISFrameworkDB database has been deployed. The next step is to add SSIS Framework application and package metadata.

One compelling reason to use an SSIS Framework is encapsulation. Once metadata is configured, a collection of SSIS packages may be executed using a single command. While there are other ways to accomplish encapsulation, I believe the combination of software design best practices (data engineering development is software development) – particularly separation of concerns (decoupling) by building small, unit-of-work-sized SSIS packages, and driving execution with metadata stored in a database is an elegant approach to addressing data engineering complexity.

An SSIS application is a construct I coined for a collection of SSIS packages that execute in a prescribed order. Now, that order may be parallel in some cases and serial in others. One key concept is the execution order is prescribed.

The core of the SSIS framework is an SSIS Application Package. An SSIS application is a collection of SSIS packages, so the application-to-package cardinality appears one-to-many. But that’s not entirely accurate.

Because ArchiveFile.dtsx may be used in many SSIS applications, the package-to-application cardinality (and by extension, the application-to-package cardinality) is actually many-to-many. Hence the need for a bridge or resolver table to maintain third-normal form: ApplicationPackages.

The ApplicationPackages table maps an SSIS package into an SSIS application. Application packages are the workers of the SSIS framework.

Also included in the repo are three files

The script named 90-Add_metadata.sql is similar to 0-Build.sql in that both scripts use SQLCMD Mode to call “child” scripts:

Remember, the backslash at the end of the ScriptPath variable and @PackageFolder parameter are vital.

Save your edits and then execute the script named 90-Add_metadata.sql (remembering to turn on SQLCMD Mode!). The messages tab should reflect the initial insert for SSIS application and package metadata:

The SSMS data project includes a script named 93-Select_applicationpackages.metadata.sql to select the metadata for the test SSIS application:

Open and execute the 93-Select_applicationpackages.metadata.sql script and view the results:

Review the metadata returned from the query carefully. This is your metadata. The PackageFolder values will be specific to your environment.

The next step is to test the framework.

When I test SSIS Framework File Community Edition, I prefer to build the command line in a text editor. I’m using Notepad++. Feel free to use Notepad or any text editor you prefer. I caution against more advanced applications like Microsoft Word because Word changes the characters used for double-quotes, etc.

There are three parts to the command line:

I installed SQL Server on the E: drive of my virtual machine, so the path to DtExec.exe on my VM is E:\Program Files\Microsoft SQL Server\140\DTS\Binn\DTExec.exe, as shown here:

I need to inform the DtExec.exe engine that I am sending it a file path, which is accomplished using the /FILE switch just before supplying the full path to the Parent.dtsx SSIS package.

It’s best to read the /SET switch (mostly) from right to left. /SET overrides the value property of the SSIS package variable named “ApplicationName”, setting it to “File Framework Test”.

The /REP switch informs DtExec’s reporting to the console (command prompt) window. The values “EWI” represent Error, Warning, and Information, respectively. This setting limits the amount of information sent to the console during execution.

To limit the console messages to a minimum, configure the output for Errors only (E) or None (N).

One Observation Before We Continue…

The SSIS package named Child2.dtsx in the FileFrameworkTest2 SSIS project is designed to fail when initially executed. The purpose of this design is to demonstrate metadata-configurable Fault Tolerance included in SSIS Framework File Community Edition.

You do not want to include carriage-returns and line feeds (CRLF) characters when you copy the command line for execution. You want to copy one long command line to the clipboard so that you can properly paste it into the command prompt window:

Copy the one-long-line command to the clipboard.

Open a command prompt window and paste the command:

Press the Enter key to execute the command. If all goes as planned, your results should appear similar to those seen here:

If you click the image above, it will open in a new window, which will allow you to read most of the messages. the most important message is found near the bottom:

If you examine the output in detail, you will note only two packages executed – Child1.dtsx and Child2.dtsx – and that Child2.dtsx failed.

Child2 Is Designed to Fail

By default, execution of the SSIS framework application “File Framework Test” is designed to fail.

Why does execution of the SSIS framework application “File Framework Test” fail?

When the SSIS solution opens, expand the FileFrameworkTest2 SSIS project in Solution Explorer, and double-click the Child2.dtsx SSIS package to open the visual editor: 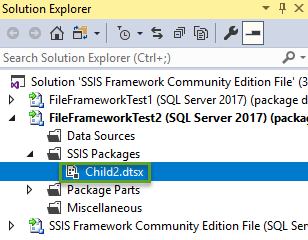 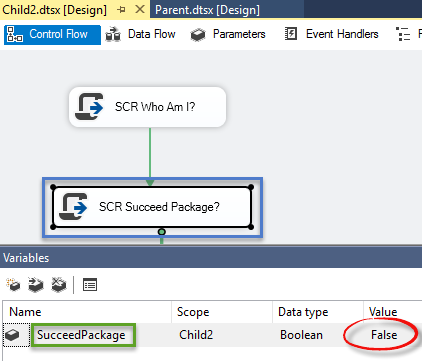 By design and by default, Child2.dtsx is configured to fail execution each and every time. 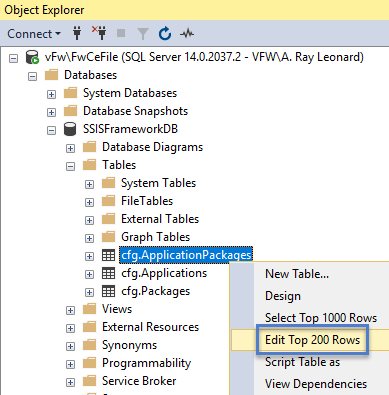 Change the FailApplicationOnPackageFailure bit value from True to False for the Child2.dtsx application package:

I prefer to close the data editing tab after the edit is complete.

Next, re-execute the test. The important result appears at the bottom of the messages returned to the console:

In this section, we find an example of implementing fault tolerance using SSIS Framework File Community Edition. Individual child packages may be configured to fail without stopping the SSIS application execution, allowing for the remaining packages in the application to execute.

I believe the artifacts included in the github repo provide a solid foundation from which to work – especially the metadata management scripts.

As always, I welcome your feedback and comments.