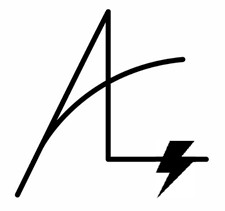 A number of folks are using the SSIS Framework Community Edition. I know because I continue to get interesting questions about it! Before I write more, I’d like to invite users to the DILM Suite Slack channel for Community Edition. If you cannot join, please let me know ([email protected]) and I will invite you!

For those who may not know, SSIS Framework Community Edition is free and open source.

This is a long post and you may not be interested in reading all of it. It can be divided into three sections:

If you search online for ways to improve SSIS performance you will find myriad tips and tricks. Most of them are valid, some are not, and at least one has been invalid since mid-2006 (and it may be the one you find first). Why is this so? The internet is an echo chamber, and search engines are the medium through which the echoes travel.

One tip you will doubtless encounter is: Execute SSIS packages in parallel to improve performance. This is excellent advice.*

*Please note the asterisk. I place an asterisk there because there’s more to the story. Lots more, in fact. I can hear thinking, “What more is there to the story, Andy?” I’m glad you asked.

Sit a spell and let Grandpa Andy tell yall a story about some data integratin’.

Suppose for a minute that you’ve read and taken my advice about writing small, unit-of-work SSIS packages. I wouldn’t blame you for taking this advice. It’s not only online, it’s written in a couple books (I know, I wrote that part of those books). One reason for building small, function-y SSIS packages is that it promotes code re-use. For example, SSIS packages that perform daily incremental loads can be re-used to perform monthly incremental loads to a database that serves as a data mart by simply changing a few parameters.

Change the parameter values and the monthly incremental load can load both quarterly and yearly data marts.

You want better performance out of the daily process, so you read and implement the parallel execution advice* you’ve found online. For our purposes let’s assume you’ve designed a star schema instead of one of those pesky data vaults (with their inherent many-to-many relationships and the ability to withstand isolated and independent loads and refreshes…).

You have dependencies. The dimensions must be loaded before the facts. You decide to manage parallelism by examining historical execution times. Since you load data in chronological order and use a brute-force change detection pattern, the daily dimension loads always complete before the fact loads reach the latest data. You decide to fire all packages at the same time and your daily execution time drops by half, monthly executions time drops to 40% of its former execution time, and everyone is ecstatic…

…until the quarterly loads.

The fact loaders begin failing. You troubleshoot and see the lookups that return dimension surrogate keys are failing to find a match. By the time you identify and check for the missing surrogate keys, you find them all loaded into the dimensions. What is going on?

Facts are, by nature, “skinny.” Although you may load many more fact rows when loading a star schema, those rows are composed mostly of numbers and are not very wide.

When an SSIS Data Flow Task loads rows, it places the rows in buffers in RAM. You can visualize these buffers as buckets or boxes. If you choose boxes, think of the buffers as rectangles that can change shape. Some rectangles are square (remember, from high school geometry?), some are wide and not tall, some are tall and not wide. No matter what, the area of the rectangle doesn’t change although the shape will change based on the shape of each table. The shape of the buffer is coupled to the shape of the table – and is specifically driven by the length of the table row.

Aside: When I talk about this in Expert SSIS, I refer to this as “thinking like a Data Flow.”

One result is that fact loaders, when they start, most often load rows differently compared the dimension loaders. In engineering-speak, fact and dimension loaders have a different performance characteristic. I learned about characteristics studying electronics. When I became an electrician in a manufacturing plant, repairing and later designing and building electrical control systems, I learned about race conditions, which is what we have here.

At lower row counts – such as daily or even monthly loads – the difference between dimensional and fact loader performance characteristics remains below the threshold, and everything appears peachy.

The race condition I describe here occurs because, at higher row counts, the dimensions load slower – much slower – than the facts load. The difference in performance characteristics crosses the threshold when one or more fact loaders reach new rows for which corresponding dimensions have not yet been loaded.

This is a race condition.

Not a Late-Arriving Dimension

But since you brought this up, is there a solution for late-arriving dimensions? Yep. Inferred members.

Let’s say you have implemented inferred member logic in your fact load and you encounter this race condition. What happens? Remember, the dimension and fact loaders are running in parallel and they work just fine for daily and monthly processing. In our scenario, the quarterly load crosses the threshold and causes a race condition.

When the fact loader reaches a dimension record that has not yet been loaded, the dimension loader is still running.

This is why SSIS Framework Community Edition defaults to serial execution.

“Great Andy, But What If I Need To Load In Parallel Using A Framework And I Mitigate Race Conditions?”

Enter the SSIS Design Pattern named the Controller Pattern. A Controller is an SSIS package that executes other SSIS packages. Controllers can be serial or parallel, or combinations of both. I’ve seen (great and talented) SSIS architects design frameworks around specific Controllers – building a Controller for each collection of loaders related to a subject area. SSIS Framework Community Edition ships with a generic metadata-driven serial controller named Parent.dtsx, found in the Framework SSIS solution.

A specific Controller can appear as shown here (click to enlarge): 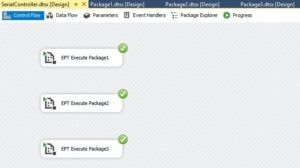 This controller achieves parallel execution. One answer to the question, “How do I execute packages in parallel?” is to build a specific controller like this one. 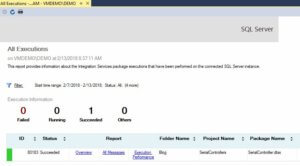 We see one and only one execution listed in the All Executions report, but if we click on the link to view the Overview report, we see each package listed individually: 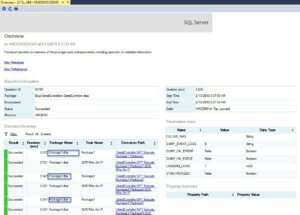 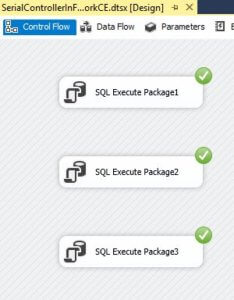 This controller uses Execute SQL Tasks instead of Execute Package Tasks. The T-SQL in the Execute SQL Tasks call a stored procedure named custom.execute_catalog_package that is part of SSIS Framework Community Edition.

One answer to the question, “How do I execute packages in parallel using SSIS Framework Community Edition?” is to build a controller such as this. 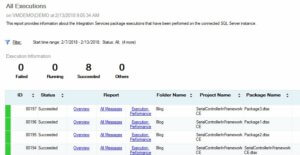 Once Upon A Time…

Not too long ago, Kent Bradshaw and I endeavored to add automated parallel package execution to our Commercial and Enterprise SSIS Frameworks. We achieved our goal, but the solution added so much complexity to the Framework and its associated metadata that we opted to not market the implemented solution.

Why? Here are some reasons:

Starting SSIS packages in parallel is very easy to accomplish in the SSIS Catalog. The SYNCHRONIZED execution parameter is False by default, and that means we could build a controller package similar to the SerialControllerInFrameworkCE.dtsx SSIS package – with precedence constraints between each Execute SQL Task, even – and the SSIS Catalog would start the packages in rapid succession. In some scenarios – such as the scenario discussed in the first section of this post – this then becomes a race condition engine.

Because controlling only when packages start is not enough to effectively manage race conditions. To mitigate the race condition described earlier I need to make sure the dimension loaders complete before starting the fact loaders. A (much simplified) Controller for such a process could appear as shown here (click to enlarge): 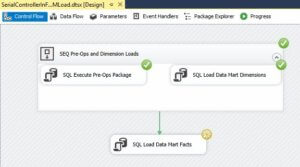 I grabbed this screenshot after the dimension loader and some (vague) pre-operations process have completed in parallel, but while the fact loader is still executing. Please note the combination of the Sequence Container and precedence constraint which ensure the fact loader does not start executing until the dimension loader execution is complete. The sequence container creates a “virtual step” whereby all tasks within the container must complete before the sequence container evaluates the precedence constraint. Since each task inside this container starts an SSIS package (and since the SYNCHRONIZED execution parameter is set to True by default in SSIS Framework Community Edition), nothing downstream of this container can begin executing until everything inside the container has completed executing. This is how we avoid the race condition scenario described earlier.

How does one automate this process in a framework?

The method Kent and I devised was to create and operate upon metadata used to define and configure a “virtual step.” In  SSIS Framework Community Edition the Application Packages table is where we store the Execution Order attribute. We reasoned if two Application Package entities shared the same value for Execution Order, the associated package(s) (I’m leaving out some complexity in the design here, but imagine executing the same package in parallel with itself…) compose a virtual step.

This was but one of our designs (we tried three). We learned managing execution dependency in a framework is not trivial. We opted instead to share the Controller pattern.

In this post I wrote about some data integration theory. I also answered a question I regularly receive about performing parallel loads using SSIS Framework Community Edition. I finally covered some of the challenges of automating a solution to manage parallel execution of SSIS packages in a Framework.

One thought on “Parallel Execution in SSIS Framework Community Edition”